The facts on eating fish

Is it or isn’t it? That is, is fresh fish a super nutritious food worthy of becoming a pescatarian? Or, isn’t it, due to the threat of contaminants such as mercury and therefore best left off the plate?

Thankfully, especially for those of us who like the taste of these finned critters, the answer is right in the middle.

Mankind has dined and thrived on fish for centuries. First, it’s a rich source of protein and especially high in two essential amino acids, lysine and methionine. Cereals are extremely low or lack this duo of protein-building blocks thus fish and cereal or grain combos have become a staple dish in nearly every culture: fish and cornmeal fungi in the Caribbean, Asian-style sushi, Italian seafood pasta and even a good old fish sandwich on hearty wheat bread in the U.S.

Second, white-fleshed fish provides virtually no carbohydrates, a boon for those who are diabetic or on weight reduction diets.

Unlike many types of fresh fruits and vegetables, the nutrient make-up of fish isn’t drastically affected by careful processing or by short storage in the refrigerator or freezer.

Fat is a subject in fish that deserves its own paragraph. In general fish are low in fat, compared to other protein sources such as poultry, pork and red meats. However, fattier fish as well as some species that don’t have much fat are important dietary sources of omega-3 polyunsaturated fatty acids (n-3 PUFAs).

Research has shown that eating this type of fat can really be a boon to health and reduce the risk of everything from heart disease and stroke to visual disorders, hyperactivity, asthma, rheumatoid arthritis, and infant brain and nerve development.

According to research published in the September 2012 journal “Nutrition Reviews” by scientists from the U.S., Japan, China, Canada and Denmark, species that provide the most n-3 PUFAs or more than 500 mg per 3.5-ounce serving include sockeye salmon, Copper River salmon, Coho salmon, fresh bluefin tuna and albacore tuna canned in water. Species that provide between 150 to 500 mg of n-3 PUFAs per 3.5-ounce serving are haddock, cod, halibut, sole, flounder, perch, black bass, tilapia and swordfish.

Global organizations such as the European Food Safety Agency and the American Heart Association vary in their recommendations. However, the range is between 250 milligrams to 1 gram (1,000 milligrams) daily. Or, said another way, a 3.5-ounce serving or three-quarters cup of flaked fish like tuna twice a week.

What isn’t accounted for in these groupings are the concentration of mercury or other potentially harmful substances. Fish, depending on where they swim, can be a major source of methyl mercury (MeHg). This is a proven neurotoxin that can be especially harmful to an unborn baby’s brain, a cause for pause if you’re thinking about becoming pregnant or are pregnant.

What to do? Adopt the best-of-both worlds approach. That is, choose more regularly types of fish that are rich in n-3 PUFAs and low in MeHg. According to that “Nutrition Reviews” article, these include light tuna, albacore or white tuna, snapper, black snapper, halibut, red snapper, ahi, flounder, swordfish, monkfish and king mackerel.

Lastly, nutrient and pollutant content aside, how fish is cooked is important for health. Leave batter fried, swimming in butter and topped with cheese sauce off in favor of poached, grilled, baked or blackened. Use lemon, lime, herbs and spices for seasoning. These offer the benefit of good taste and a few key nutrients of their own.

Carol Bareuther is a registered dietitian and a regular contributor to The Triton. Comments on this column are welcome at editorial@the-triton.com.

With age comes wisdom. And with time comes experience. But wisdom and experience don’t automatically bring jobs, as a group of yacht captains noted in our monthly From the

Saving the goose and her golden eggs from All Aboard Florida

On a recent ride on Ft. Lauderdale’s New River, the first thing that struck me was the amazing variety and activity. Crowding the shores of the river are downtown 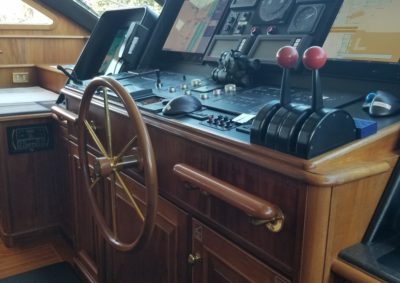 Northrop & Johnson’s Asia offices have teamed up with Catana Group to sell the French shipyard’s Bali Catamarans brand of sailing and motor multihulls in the Philippines, Singapore, Malaysia …

The Panama Canal’s newly expanded locks are scheduled for inauguration on June 26 and the first commercial vessels will transit on June 27, according to reports in media reports.