Leader’s actions tell the crew what is acceptable

When an accident takes place, somewhere along the way someone has made a bad decision or has shown poor judgment. Let’s look at how leaders influence the judgments made by their people as well as discuss how leaders can help their crew make better decisions moving forward.

What exactly is judgment? Webster’s dictionary defines it as the process of forming an opinion or evaluation by discerning and comparing. As a leader, your behavior will be a reference point for your followers to use when they make decisions.

How you influence others

From a leadership perspective, it’s critical to understand how influential you are in the eyes of your co-workers. Leaders set the standard and heavily affect the culture in which everyone works. This influence happens because being a leader puts you in the position of being a role model. Everything you say and do in your leadership capacity is examined in many ways from many perspectives.

For example, if you as first mate are in St. Maarten and take the tender to the Soggy Dollar for a few drinks and then drive back to the boat, your actions send a strong message to everyone on your team. You have just told them it’s OK to drink and drive.

No matter what you say, it’s your actions that speak volumes. If you find yourself doing the exact opposite of what you tell others to do, you will have little respect from those around you.

But beyond being a hypocrite, you influence the future judgment of the rest of the team. In similar situations your co-workers will remember that you drank before getting behind the controls of the tender, so it must be OK for them to do it, too.

Another way you influence your team members is if you consciously know you act from your values base. An example of this is the idea of being prepared. When the deck crew take the time to make sure the tender is ready to go at a moment’s notice, this displays the leadership values of being prepared, planning and foresight.

On most boats, this task is done automatically, as a normal operating procedure. What is often overlooked or forgotten is where this behavior comes from. It comes from good judgment in order to be prepared for the future.

You want to help the members of your team make better decisions. Here are a few tips to do that:

Boats commonly will have some form of training for people to use heavy equipment such as the crane or other potentially dangerous equipment. The role of the leader and trainer is to be positive and reinforce the learning process by allowing mistakes in controlled situations. This is particularly true in jobs where there is an element of danger.

How you behave when people fail reflects your values. If you act from a place of acceptance and non-judgment, those values will start to be visible in those around you. By acting on your values, you encourage others to do the same.

Having a full dress rehearsal allows problems to be identified and suggestions to be made without the pressure of having the boss at the table. This same exercise can be done with the deck crew for setting up and using the toys on deck with the interior crew as the mock guests.

Everyone in the various departments will now have better insight into how things should operate and be better able to explain it to guests if questions are asked.

Suggestions require reflection. Suggestions display to leaders that people are looking at problems or systems with a critical eye in order to come up with better, different ways of doing things.

Leaders need to genuinely accept suggestions rather than dismiss them out of hand. The best leaders let go of ego and accept input for the betterment of everyone they lead.

Thinking is the starting place for solving problems, judgment and decision making. The behaviors you display in your leadership role will influence the decisions people make. Encouraging people to make mistakes, reflect on their actions, and practice what they do will go a long way toward building good judgment in your co-workers.

Paul Ferdais is founder and owner of The Marine Leadership Group based in Ft. Lauderdale and Vancouver delivering leadership training workshops and coaching (www.marineleadershipgroup.com). He has a master’s degree in leadership and spent seven years working as a deckhand, mate and first officer on yachts. Comments are welcome at editorial@the-triton.com.

The Royal Yacht Squadron on the Isle of Wight, one of the world's most prestigious yacht clubs, has voted to allow women to become full members for the first time in its nearly 200-year history, …

Capt. Carlos Macias shakes his head remembering all the trash he saw every day running a sightseeing boat in Miami. It made him mad. “These waters are my swimming pool,” Macias, a … 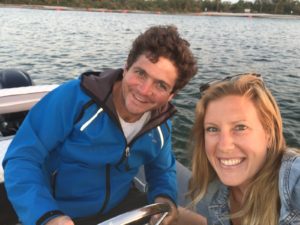 Loving chef will always be remembered

By Alex Barnard Since the day we met on New Year’s Eve 2014, Jacques and I woke up in the same place all but a handful of times. But on the morning of Oct. 15, he wasn’t beside me when I …

Rudders and their function can fall victim to vibration trouble, too

Even though a rudder is part of a vessel’s steering system, which is obviously an important mechanism, it usually doesn’t get that much attention. What action items should be addressed for …

The shocking truth about AEDs

The vast majority of the larger boats have AEDs, Automated External Defibrillators. But how many of these AEDs are working properly and how many crew know when and how to use this life-saving … 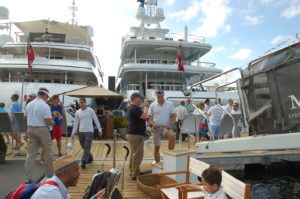 European events and publishing company Informa Exhibitions has bought Ft. Lauderdale-based Show Management, producers of the Fort Lauderdale International Boat Show, for $133 million, according to a …

Pete Southgate has been named director of yacht management USA with Ocean Management, a division of Ocean Independence. He is in the Fort …

Capt. Kelly Esser and Mate Terry Roche of M/Y Mary Alice II, a Westport 130, helped the crew of a U.S. Navy vessel, called the Sealion, on …

Spanish authorities broke up a drug ring in mid-July when they seized 1,100 pounds (500 kilos) of cocaine from a 35-foot sailing yacht off …