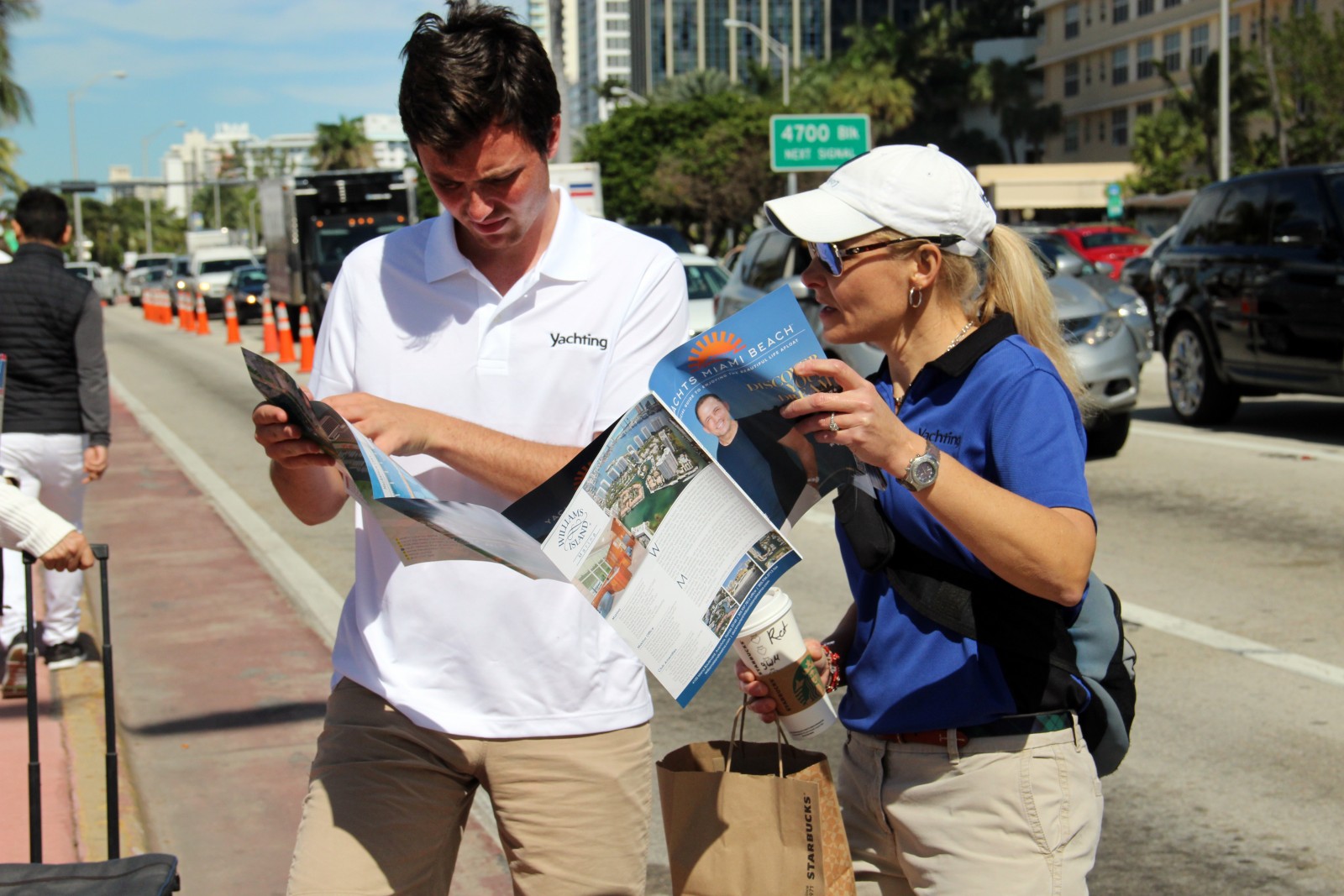 Captains, crew and exhibitors said attendance was down at this year’s Yachts Miami Beach, but they had mixed reactions about what that means.

Formerly known as the Yacht & Brokerage Show, the mile-long, in-water show is in its 28th year on Collins Avenue on Indian Creek. Aside from the amount of traffic on the docks, much of this year’s conversation had to do with a new satellite location at Island Gardens’ Deep Harbour on Watson Island and the new location of the Miami International Boat show on Virginia Key.

Burger has been in the same location on Collins Avenue for more than 10 years, and company president and CEO Jim Ruffolo feels like their clients know where to find them no matter what.

“Attendance was down, but we’re doing well here,” Ruffolo said.

“It’s been very confusing, even as of this week, we were getting new emails with correction on this, correction on that,” he said in reference to exhibitors incorrectly describing their location.

This year, the show’s largest yachts are on display at Deep Harbour at Island Gardens.

“What we heard, is that if you made to where the big boats were, it was nice, clean and well organized,” Ruffolo said. “But, I think most people didn’t know about it.”

“We did hear that people really like the NMMA show, the Miami International Boat Show, because there were boats in the water,” Ruffolo said. “But we heard the difficulty was in getting to it.” 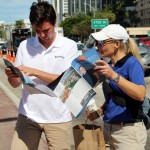 Yachts Miami Beach attendees try to orient themselves using a map of the event. Photo by Suzette Cook

But Ruffolo said the industry has to be flexible about the changes in venue and show names.

Yachts Miami Beach is owned by Show Management and FYBA. At show close on Monday, Daniel Grant, a show spokesperson with Pierson Grant Public Relations, said it was still too early to tell about attendance numbers for the free events.

“There is no gate to this show, but we’ll be interested to see how exhibitors did,” Grant said. “If it was less crowded this year, was it with fewer tire-kickers and casual attendees?”

“Attendance may have been lower, but that leaves the real shoppers on the docks instead of the people that may come to tour a yacht and have their photo taken,” he said.

Show Management saw the popularity of the water transportation on Thursday and Friday with big crowds that wanted to go to the Miami International Boat Show, Grant said.

“To alleviate that, we added buses that took people right to the front gate,” Grant said of buses added for Saturday and Sunday. Grant said next year will see more water taxis and shuttles.

“Because the Miami International Boat Show moved, some of the folks that would have gone to the convention center and also come to Collins Avenue may have found it more difficult this year,” Grant said.

“This is the first year with the other show not taking place on the beach, but the learning curve was quick.”

The big plus for this year’s show came with the addition of the Island Gardens satellite location, he said.

“Previously, the biggest yacht on Indian Creek was about 200 feet,” Grant said. “Now we have quite a few over 200 feet. This brings a totally different client. With this we can accommodate the largest yachts in the world.”

Capt. Herb Magney, a sales consultant with IYC, spent the week at the display at Island Gardens, but also visited the show on Indian Creek.

“Collins Avenue doesn’t look that much different than other years,” Magney said. “But Island Gardens added a whole new feel,” he said. “It took this show to a completely new level.”

He said the location offered easy access by car and water with tons of parking.

“Owners came on their own tenders and there were several helicopter drop-offs,” Magney said.

He worked with attendees who had confusion as to whether the Island Gardens show was by invite only. Visitors were required to have an appointment with a broker to visit yachts on the docks.

Eng. Gordon Skellett has worked this show about five times. This year on M/Y No Bada Bees, a 127-foot IAG, he said attendance was extremely light.

“We didn’t see very many people here, I think everybody is worried about which way the market is going,” Skellett said. “Definitely the world economy is affecting this, I think people are waiting to see what happens.”

Skellett didn’t notice that the largest yachts were not on Collins Avenue and had not heard about Island Gardens.

A captain on a nearby yacht also felt that numbers were down this year, he prefered his name not be used.

“It’s dead, dead, this year, but that’s a no brainer if you look at world economy,” the captain said. “China, Europe and more are all down, particularly with reference to luxury items. People in the oil industry are taking it easy. Some are still moving, they just dig deeper and do more.”

Overall, people in the yachting industry prefer to be positive. Captains and crew smile with a can-do attitude. Businesses and brokers aim to please. So even with mixed feedback on this year’s Yachts Miami Beach, most come away with a positive spin like Burger’s Ruffolo.

“It’s first year woes and you’ve got to accept that,” Ruffolo said. “We’ll stay at this show and see what happens.” 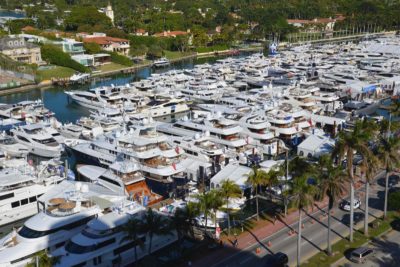 Boat shows an opportunity for connections

I recently wrote a column about how boat shows can be a challenging, stressful or possibly boring time for captains and crew working them. But they also are an 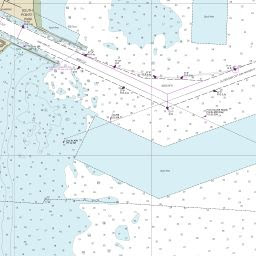 The U.S. Coast Guard is taking mariner input on waterway use in the Miami Main Channel and Government Cut. A Waterway Analysis and Management System (WAMS) survey will gather 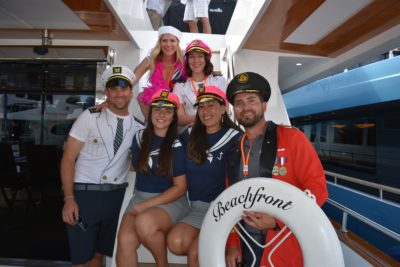 Sea Sick: In an opioid overdose, this drug could save a life

The Singapore Yacht Show 2020, scheduled for March 19-22, has been postponed until October because of the coronavirus epidemic.  Andy Treadwell, CEO and founder of the show, posted the …