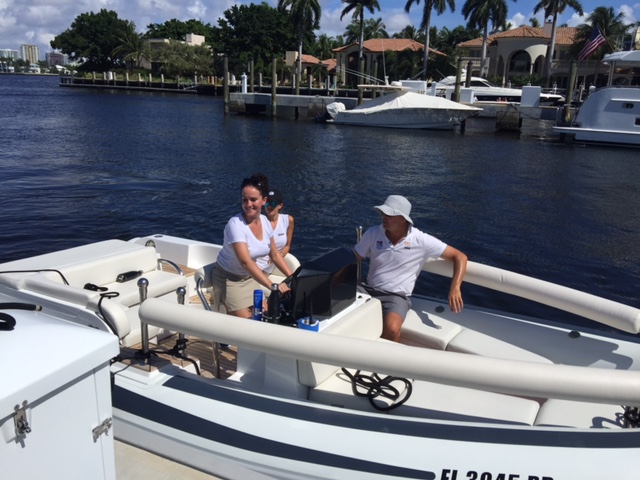 A month after sharing his ideas for crew training, Capt. Glen Allen of Fleet Miami has organized his second three-day course for the company’s employees and says he’s perilously close to what he envisions as effective training that could help stop crew turnover.

“I’m really excited about it,” Capt. Allen said a few days after the course ended. “It’s already made a difference in our organization, and it is something I feel could make a difference in yachting overall. Hopefully, other people will mimic us and start to do this, too.”

The first class brought together about half boat crew and half of the staff from the company’s villa. While it was good in bringing the employees together, it lacked the impact Capt. Allen was hoping for.

The second class held in mid-August aboard the 154-foot M/Y Usher delivered.

“I am so amazed how well it worked,” said Capt. Veronica Hast, who took over Usher in early August as relief while its full-time captain Nicole Fawcett is having a baby. “I saw a crew of 10 people go from just people who work together to being a real team. I felt it too, in just three days. It was the kind of feeling you have after the hardest charter season ever or after a year of working together.”

As an example, she described what happened immediately after the course, late on that Friday afternoon.

“We all worked late to catch up on some things, put the tender away, things like that,” she recalled. “It was close to 6 when I finished, and I looked outside and saw the deckhand chamoising the tender. I thought, ‘Oh, I think I’ll go help chamois.’ ”

She laughed telling the story.

“I can’t tell you the last time I wanted to go out and chamois the tender.”

When she went outside, the second engineer was already there helping — two departments that rarely conversed outside the crew mess — and within about 10 minutes, the engineer came out to help coil lines.

“It’s like we all just said, ‘Oh, there’s more work to be done’,” Capt. Hast said. “Nobody was complaining that it was 6 o’clock and time to go. We all just got it done.”

Tim Murphy, the second engineer, said the course made him feel different about helping out. 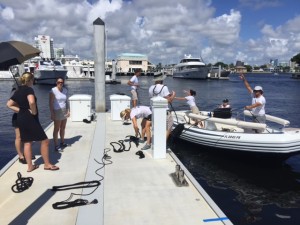 Capt. Allen’s course — which he has dubbed Yacht University and whose curriculum was created by former yachtie Eric West — teach leadership, work ethics, business ethics and team building. Two-and-a-half days are classroom teaching with exercises; half a day is on the water where crew learn other positions as well as marlinspike seamanship, Allen said.

At the beginning, crew were asked to interview each other and tell the group about the other person, and they were asked to tell short stories about themselves, Murphy said. Doing that — and getting the feedback from everyone else — was a good feeling.

“We learned a lot about each other doing that,” Murphy said, noting that such personal conversation wasn’t usually what crew talked about off charter over beers.

When asked what surprised them about the training, Murphy and Chief Stew Mimi Adams both said it was how open everyone was.

“I was surprised at the openness of everyone to share intimate things, everyone’s willingness to just jump into it,” said Murphy, who worked on yachts on and off over the past 10 years, and joined Usher in April. “What we were really doing was creating openness and a safe environment for everyone to communicate with each other.”

They both also know it will change how they operate going forward.

“We’ll trust each other more,” Adams said. “Things don’t go well when people feel they can’t rely on each other. When you know the people you work with, you work better as a team, whether they’re in your department or not.”

“We’ll be less likely to be irritated when something doesn’t go right, and instead we’ll be more willing to step back and not react,” Murphy said.

Perhaps one of the biggest impacts on the crew might be how it made them feel.

“It kind of shows us how much they care,” Adams said. “We’ve all talked about it. It was such a nice gift. It left us feeling really positive.”

That will be the true test, Capt. Allen said, to see if his crew stick together, something he has been battling in the recent past.

“Crew retention is the big one,” he said. “And then we’ll see how those new crew develop as crew members and how they advance.”

Fleet Miami has a unique program of nine boats where crew can begin as entry level, but then move up and around on the vessels to become heads of department and eventually captains, if they want. 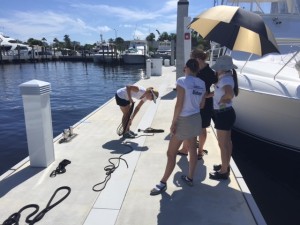 Capt. Allen plans to present the course to the industry at the Fort Lauderdale International Boat Show in November when the industry comes together in South Florida.

“I really think that Glen and Eric are on to something,” Capt. Hast said. “What this training does is it makes you appreciate the person you’re working with. It’s not brainwashing you to be a team member. You genuinely see the value and uniqueness of the person you’re working beside. It’s not just the deckie. Now it’s the guy who rode his bike across Spain. He’s really cool.”

At the end of August, Usher headed out for a week charter in the Bahamas and then up to New England for a late-season cruise.

Capt. Allen is, too.

“One thing that came to light at the end of this course is that two other yachts docked at Pier 66 came up and asked us how they can get this training,” he said. “That shows me the direction we need to go with this.”

Lucy Chabot Reed is publisher of The Triton. Comments are welcome below.