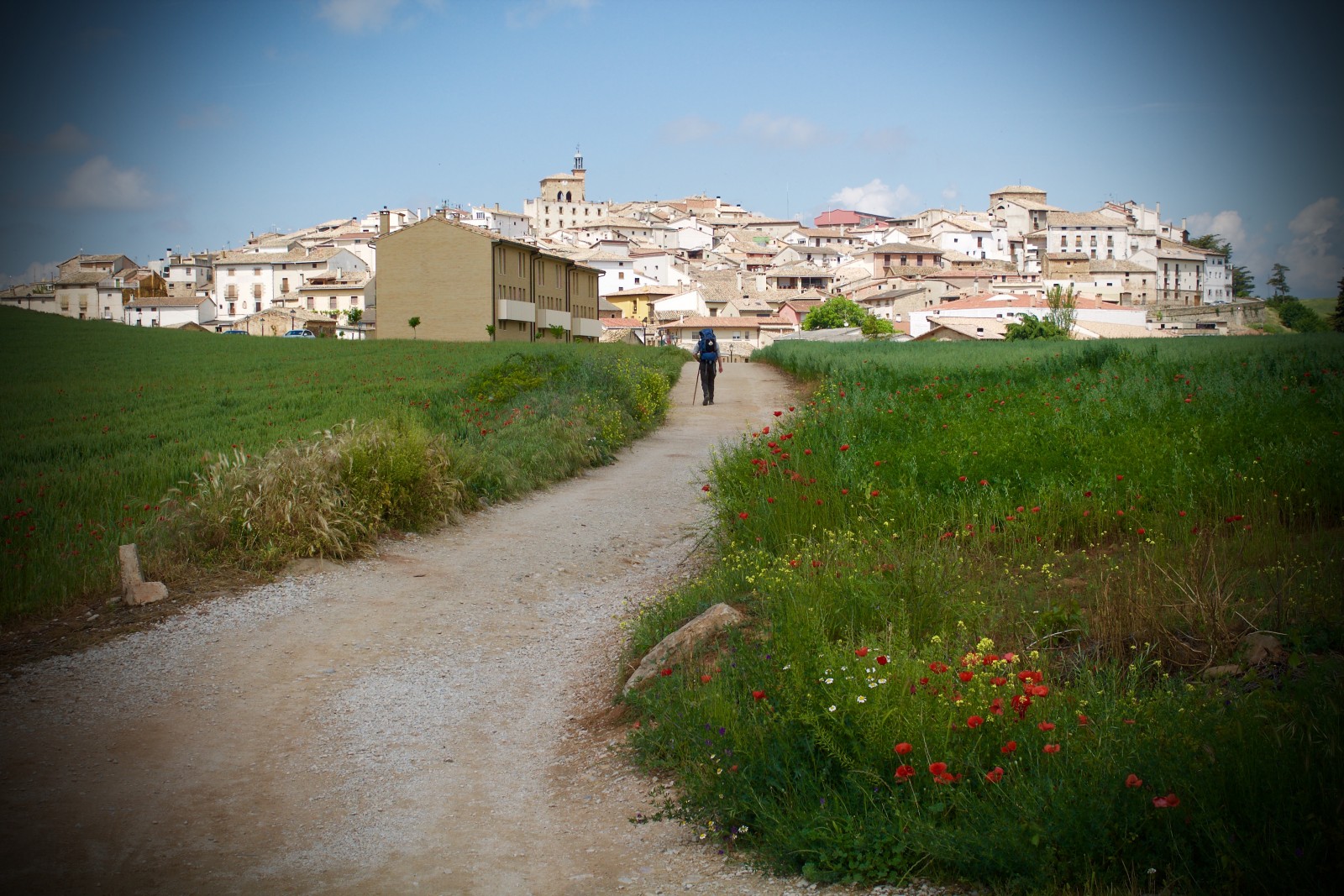 Walking off my twenties on the Camino de Santiago

Where in the World: Story and photos by Sonja Maryn

“So, what brought you to the Camino?”

It’s a question asked at any time of any interaction with anyone you meet on the Camino de Santiago. I was turning 30. The past year had been a fairly rough one. It was my goal to bid my 20s good riddance in some sort of ceremonious, serious fashion. Those reckless, ill-advised, naïve and naughty years had been fun, but often left me feeling less-than, unaccomplished, regretful – wasted (in all implications).

A month before my birthday, I had started thinking that maybe I didn’t want a party this year. Maybe I didn’t want to get drunk on free shots in stilettos I would ruin halfway through the night,  with an onslaught of friends and photos with blurry recollections and #dirtythirty captions. Okay, maybe a part of me kind of wanted that, but more so I wanted to start the year off clear-headed.

So, what gives me clarity? Nature. Exercise. Solo travel.

The Camino de Santiago is a web of ancient paths across Europe that lead to the venerated city of Santiago de Compostela in Spain, and hiking it was one of the longest standing adventures on my travel ‘to do’ list. The pilgrimage, simple in its requirements yet daunting in its entirety, has been for centuries a remedy for the sinners, the seekers and the strange.

The most famous and popular route is the 800-kilometer  Camino Frances that begins in the French Pyrenees and continues west across Spain to Santiago. There is evidence that parts of this pilgrimage pre-date Christianity, but over the greater chunk of centuries it has been walked in the name of Catholicism. Today, it is sought out for many reasons, ranging from religion and spirituality to outdoor recreation and, in some cases, just drinking a lot of wine.

Floating fashionably between jobs in temperate Barcelona and Mallorca before the superyacht season kicked off, bored of drinking cava and eating olives every day with my boyfriend, I was fortunate enough to have the time and the means to do something this significant before getting back to work on a floating, multimillion-dollar toy.

So, after rustling up enough information and supplies, I made my way to the darling French town of St. Jean Pied du Port, the starting point for hiking the Camino Frances. I bumbled through the motions with my small backpack of essentials, and before I could really wrap my head around what I was doing, I was doing it.

Here is an excerpt from my journal on the first day: “My state today – physically ill, perhaps just an extended hangover from too many hotels, restaurants, bars and siestas. Completely unprepared, unorganized, groggy and tired. In need of alone time and down time. Emotionally on edge, so much feeling at once. Concerned I won’t find the answers I am seeking. Worried this walk won’t change me. Worried I’ll always be worried. Exhausted from worrying. Pretty certain my shoes are going to f%$# my feet up pretty bad.”

One tradition on the Camino is that you bring a shell with you, tied onto your backpack usually, to signify your pilgrimage. It’s an ancient symbol representing the saint and now the official symbol used to mark the trail. The shells are everywhere – in the ornate cathedrals and churches, decorating the houses in the villages along the way and attached to the backs of the hundreds of thousands of pilgrims setting foot on the path every year. For me, the shell represented the memories, mistakes, mishaps, melancholy and melodrama I no longer wanted to feel affected by. I wrote “the shell i shall shed” inside of it. I would carry it with me throughout the journey and just before I reached the destination of Santiago, I would leave it behind.

I walked one step at a time over the stunning French Pyrenees and into Spain, the beauty physically shaking me awake. I trekked on through Basque country, small forests with lore of witchcraft, opening my eyes for the first time to the history and true diversity of culture within the country. I marveled at vineyards that stretched as far as I could see, and to my utter shock and delight, drank from a free wine fountain that I happened upon one morning like a miraculous, fantasy-come-true, you’re-welcome, you-have-two-wishes-left poof from a Genie.

I limped into towns and shabby ‘albergues,’ the traditional accommodation of basic, mixed-gender dormitories. I cursed the weather, cursed the hairs on the shower floor, cursed my drenched, exhausted self for coming on this stupid walk in the first place. I slunk into private, not-in-the-budget rooms some nights just to ease my aching meniscus and mind. I popped huge foot blisters, bought a knee brace, lathered myself in Tiger balm and started an Ibuprofen regime. I cried about things I hadn’t thought about in ages and sighed away heaviness that I’d come there to release.

There’s a tip I heard on the Camino about your backpack: “Don’t carry your pack; wear it, and it will feel a lot less heavy.” You could say the same about whatever weight it is you have on your back and shoulders. Once you’ve shifted it around enough and accepted that it’s a part of you, it’s a lot less of a struggle and you can move forward much easier.

I meandered along in awe through fields of red and yellow, ever-changing wildflowers and wheat. I spent hours walking and chatting with people I would never normally interact with. I learned about opera, about repression in modern day Ireland, about infidelity, about tragedy, love, loss, God, gay rights, AA and the Australian army. I took videos of scintillating beetles and hopped over snails. I heard stories that gave me perspective, that made me laugh, that shined light on all the good I am blessed with. I helped others and they helped me.

I doused my head in “magical fountains” that allegedly cured all ailments. I happily tucked into the local wines and the strange culinary delicacies each region provided. I wandered respectfully into a few churches and listened for a short while to the foreign services while observing the extraordinary architecture and the faces of those in the pews. When I became lost in deep thought or distracted by my aches and pains, the little shells and yellow arrows marking the way reminded me just often enough to look up, stay present and keep moving on. Every once in a while I would remember, oh yeah, I am walking across Spain right now – that’s actually pretty cool.

I spotted a snow-capped mountain range on the horizon one day and soon after, on a cool misty morning, found myself crossing over it. I “hike-danced” uphill on a blazing hot afternoon and consciously felt the purest, happiest, radiant energy beaming through me. Sometimes I just got an urge to run or sing, so I would. I looked at my reflection, without a speck of makeup and rarely a comb through my knotted locks of hair, and I felt beautiful. I rambled on with my little backpack through weeks of heavy rain, thunder, lightning, hail and dewy mist, through muggy, monotonously overcast days and bright sun that warmed my weary pilgrim body.

They say the first week you hike the Camino is all about the body – externally finding your way, figuring out the routine, what works for you and what doesn’t. The second week is spent in your head, the toughest part. It coordinates with the long, flat Meseta, where the destinations seem more distant, the small hamlets are few and far between, and you feel very small under that big open sky. The third week is the heart and soul of the journey – the harmony of the body and mind. A sense of accomplishment, capability and ease starts to kick in. Ideas form. Gratitude takes the helm and aims your vessel at an angle into the waves that somehow don’t seem as big and bumpy anymore.

On the final day of my Camino, hours before reaching Santiago, where I would walk straight to the pilgrim office and receive my Compostela, I veered off the path into a eucalyptus forest for my own special “ceremony” to celebrate my journey. I stopped at the tree that stood out most to me – a tall and twisted tree, it’s paper like bark peeling away in a consistent state of renewal, revealing smooth, sturdy wood beneath. The leaves smelled fresh, their oils famously used for cleansing the passageways. In front of this tree, but from its own roots, sprouted a new one, small with only two branches so far, completely green.

I took a lighter and burned the yarn that tied my scallop shell to my pack, severing the cord. The shell now seemed like just an idea, a skewed perception of myself that was casting its shadow on the parts of me that needed light to grow. I placed it between the old tree and the new tree on the soil and kissed it. Then I found a sad poem I’d written on the Camino in tears one day, tore it from my journal, rolled it up next to the shell, and stuck it in the dirt.

I didn’t stay hung up on what I was leaving behind; I’d spent enough time weeding through the shadows of the shell. It didn’t need re-visiting. I looked up at the treetops and the sky, now blue in the full morning and thought: “I will never be without joy or love. Here’s to a cold beer waiting for me at beautiful, ever-changing sunsets, a hot cup of coffee for every earned sunrise, and an infinite amount of people in this world to share them with. Here’s to whatever comes next.”

Sonja Maryn is from Vancouver Island, British Columbia, Canada. She has crewed on yachts for five years. Comments are welcome below.