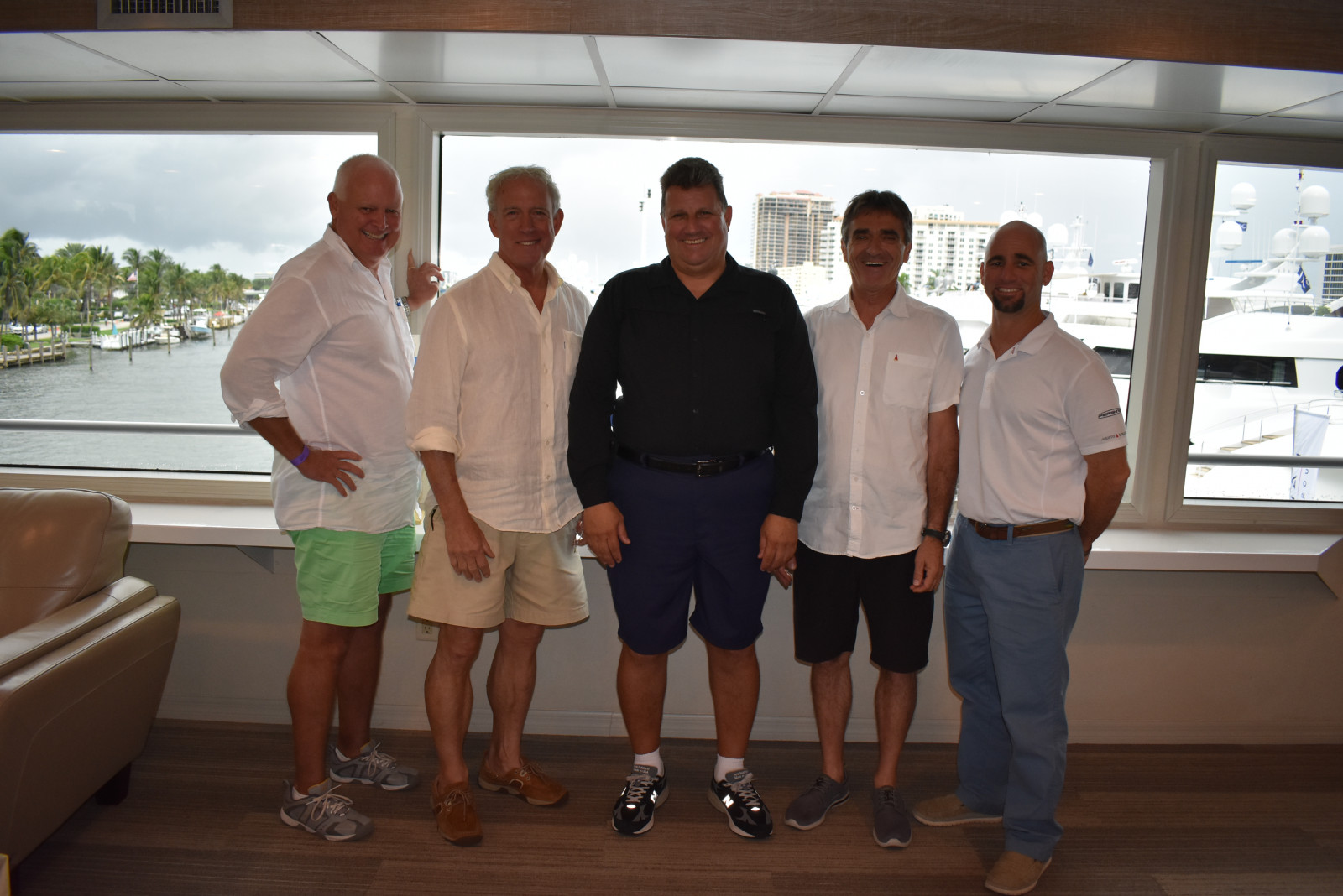 From the Bridge: Captains’ legacies continue to be created

From the Bridge: by Dorie Cox

Among the hundreds of people on the docks at the Fort Lauderdale International Boat Show last month, a veteran yacht captain heard someone call out his name.

“I’ve been wanting to see you for 10 years,” a young man said to the captain. He had worked with the captain as a deckhand and continued with an apology. “I’m sorry about what I did and how I acted when I worked for you.”

The captain recalled the challenges of working with the young man, but said he had persisted to help the deckhand excel.

“He said I kept after him and I said, ‘If you want to grow, I will help you,’ ” the veteran said. The young man, now a captain himself, said, “You had so much influence on me, and now I have 10 guys working for me.”

When The Triton staff decided to discuss yacht captains’ legacies for this month’s Triton From the Bridge lunch, we did not expect to hear such a clear and timely example. Each month for more than 15 years, The Triton meets with a different group of captains to discuss a yacht issue, and last month we met on the third deck of the M/V Grand Floridian, surrounded by a clear view of hundreds of boats on display.

This captain continues to foster the growth of his crew, noting that three of his former deckhands are now captains.

Others weighed in with similar tales.

“I try to pass on what I know and I’ve watched my crew go from deck to engineer to captain,” another of the attendees said. “A lot of them moved up – kids who were deckhands are now running boats bigger than me.”

“I just saw one of mine running a 105-footer,” another captain said, as he looked out the window at nearby yachts. “This deckhand’s now done well. I like to keep in touch with as many as I can.”

Proud of the advancements of a talented engineer that he had trained, one of the captains said he had helped the engineer get a better job on another boat, then got to see that the subsequent captain was grateful for the skilled crew.

One of the group recalled how he tried and tried to work with a crew member, but eventually had to fire him.

“But he still calls me,” the captain said.

To that, the first captain said with a laugh, “Of course, there have been a few I wanted to throw over the side. But it is important to promote kids.”

The Merriam-Webster dictionary defines legacy as “something transmitted by or received from an ancestor or predecessor or from the past.”

So who built and shared legacies for this group? Several captains credit family members.

“I had a handful of captains in my family,” a captain said. “I used to listen wide-eyed to stories.” That group included his father, who taught him by example.

“He locked me in the cabin and said, ‘Can you feel the movement? Figure out where we are by the current and the wind’,” the captain said. “My dad could do all of that.”

One of the captains at the table said a boss from an early job showed how to be a good leader. That boss would sit back with his pipe, so calm in a dangerous situation, the captain said.

“He said, ‘Sonny, I can teach you one thing,’ ” the captain said. “Take it slow and easy and you’ll still have a job. Take it hard and fast and you better have your bag packed.”

Another captain said his life was also changed by an early mentor.

“He was cool, and he showed me that learning was cool,” the captain said. “His mentoring was his coolness of having skills. Today, I pass that on. It’s cool to be able to do things that others can’t do.”

One lunch attendee said that decades ago, while fresh on a new job, his boss handed him the wheel when he did not feel ready.

“He said, ‘You take the boat back,’ ” the captain recalled. “He insisted on me keeping my sea time. He’s been a good mentor and always pushed me.”

Those lessons learned are still being used today — and still being handed down. But it is not always the great captains that leave a legacy, a captain said.

“I remember working for a maniac captain. I found him with his feet on the dashboard, holding a beer, asleep,” the captain said. “That taught me about the guy I don’t want to be – the anti-mentor.”

People can’t fully control their legacy, or what others may take away from lessons shared, but we asked the captains to consider what they think other people might be learning from them. We chose a couple of angles to try to gauge this and started with yacht crew.

Decades of experience has taught most of this group how to be captains as they “worked their way up through the hawsepipe” and those are the lessons they still teach.

“The crew make fun of me taking noon sites with the sextant,” one of the captains said. That was until he asked the crew to consider how to navigate with no GPS, electronic charts, computers or electricity.

“Now think, what if you have nothing?” the captain asked them.

Similarly, it was not until the yacht lost power that the crew understood some of their captain’s work requests, another captain said.

“I teach crew to log each hour,” he said, recalling one day when the work paid off. “We lost all electric and had to do dead reckoning.”

Each of the captains had examples of skills they have shared and have seen the crew absorb the information to use and share themselves. A crew member who had scratched the yacht was told to fix it. He got quotes for paint jobs but never considered how to do it himself.

“So I did it and had three crew hanging on me to learn,” the captain said. “I firmly believe in tradition, that crew need to understand, to have a sense of what it takes to maintain a boat, what it takes to build a boat. I look for this and give them that sense.”

This captain leads by example, as his father did, and helps crew learn to have pride in their work.

“It’s important to stick around and see how will this hold up next year,” he said.

Another captain agreed that crew can learn from captains not to cut corners. “You have to do your best work all the time or you and the team – and the owner – will pay the consequences.”

“You need passion and want to learn to excel, this is a meritocracy,” the first captain said.

Such legacy continues as the captain said he sees those traits in his crew and how they teach each other. “They have taken it far in every category.”

Another place to look for a legacy is with yacht owners. The actions and input of several captains have helped change the way owners use their yachts.

“I taught him how to enjoy the boat and to have fun,” one of the captains said. “Remember, owners don’t need yachts.”

And often captains leave a mark on how the vessel is maintained or run.

“Like policies and procedures and changes on the boat, he [the yacht owner] knows it comes from me,” a captain said. “It takes years to develop procedures and policy, and they have evolved over the years.”

“It’s a total package, the captain and the boat,” a captain said. “But when it comes down to it, it is always about the people.”

Several captains recalled an old charter boat from years ago that was popular despite the vessel’s shortcomings.

“There was a crappy boat that did 38 weeks a year charter, but everyone knew that was the best charter boat around,” one of the captains said. “It was the people.”

This led the conversation to how the vendors, businesses, marinas and yards that work with these captains are another way to measure a legacy. A yacht’s reputation in the industry can be helpful or harmful. One captain talked about being hired on a boat with a bad one.

“The reputation followed the boat and they didn’t pay the bill,” the captain said. He talked with the owner and explained how important it is to right past wrongs. The bill was paid and the captain’s suggestion helped repair the yacht’s reputation.

A final gauge of a person’s legacy can come in the form of an obituary or memorial after death. This topic made the captains uncomfortable, and they avoided it with jokes. But we persisted and several captains said that it is hard to know what each of us sees as another’s legacy. “There are a couple of people who I would like to write my obituary, the ones who know me best,” a captain finally responded.

“No one knows the whole story or even enough of it,” another captain said.

As we closed the conversation to return to the boat show, the captains thought about their legacies – how they try to be first up in the morning and last down at night, how they try to instill lessons and skills, and how they try to lead by example.

This Halloween season, one of the captains said, his crew placed a skeleton on the bridge station in the captain’s chair.