During an August visit to Ireland last year, I stopped by the country’s largest marina where superyachts tie up just outside Dublin.

“Most of the big ones are American-owned,” Paal Janson, general manager of Dun Laoghaire Marina, said, “with many vessels on passage from the Mediterranean to West Coast Scottish islands and the Norwegian fjords for their summer cruises. We are one of the few, if not the only,  marina in the Irish Sea that can accommodate vessels of this size with 24/7 access by sea. Anywhere else means tying up to a fixed quay wall and crew having to tend the mooring lines to allow for tidal adjustments.”

The marina is accessible during all stages of tides with a minimum depth of 4.0 meters during Low Water Springs tide, generally the lowest tide experienced in a harbour, he said.

This five gold anchor-rated marina offers superyachts of up to 50 meters all the services required while crew explore the delights of Dun Laoghaire and Dublin City during their stopovers. From April to October, staff is on hand to serve guests 24 hours a day; otherwise, staff is available from 8 a.m. to 10 p.m. in the off-peak season.

The marina’s staff accommodates all sorts of requests for information and assistance, including taxis, restaurant reservations, bespoke tour guides, car or bike rentals, customs and immigration, repairs and servicing. Staff can also help with services that often come under the remit of a shipping agent, all included in the berthing fees. Marina workboats can be used to transport materials, stores, etc. directly to the yacht and save the crew from having to carry or transport such items themselves.

Having served as marina GM since 2011, Janson is a mine of information about his region and his guests’ interests. He tells me that a favorite crew day-off request is sailboat racing around the huge Dublin Bay in which the marina is situated, renowned for its wind that also make kite surfing an exhilarating and popular challenge. Race participation can be arranged through the marina’s contacts in all the waterfront sailing clubs as well as with marina boats looking for extra racing crew. With a large and vibrant fleet, Dublin Bay is considered the cradle of modern yacht racing from the 19th century to the present day.

“Just a 30-minute suburban train or bus ride from in front of the marina, our guests arrive in a vibrant English-speaking capital city (population 550,000) with an international airport offering excellent European and trans-Atlantic connections. There is even a 45-minute coach transfer from Dun Laoghaire direct to Dublin airport. In the heart of Dublin, the famous Temple Bar riverside neighborhood, spread over many cobbled pedestrian lanes and streets, is filled with joyfully crowded pubs and restaurants both day and evening. And then there’s the Guinness stout, which makes up almost one in two pints consumed in Ireland every day. What more can I say?” Janson said with a grin.

At Dublin’s Guinness Storehouse built in 1904, 20 million visitors per year immerse themselves  in the Guinness story and sample some of the iconic, dark ruby red beverage. Currently, three million pints of Guinness are brewed onsite every day at the St James’s Gate brewery, making it the largest stout export brewery in the world. With seven floors of storytelling and sampling to occupy visitors, this is no quick walk through. A good place to wrap up the experience is the Storehouse’s Gravity Bar high above Dublin’s streets.

Whether you are a fan of museums or not, the recently opened EPIC Irish Emigration Museum on Dublin’s waterfront is a new attraction you won’t want to pass up. In 2019 it was justifiably named Europe’s leading tourist attraction. Located in a massive customs house that was formerly an 1820s wine and tobacco warehouse, you will walk through 20 high-tech, interactive galleries that bring alive the story of Ireland’s 10 million-strong emigration to many countries over several centuries and learn about the remarkable contributions these Irish men and women have made to the world in terms of culture, science, politics and other themes. With equal measures of tragedy and celebration, EPIC definitely brings Irish history to life by harnessing the best of 21st century technology.

DK Eyewitness’s Top 10 Dublin guidebook sums up the spirit of Dublin as “quite possibly the most sociable city in the world.” The Irish word “craic” – loosely translated as “good times” or “fun” – is used a lot in conversations with the locals. Don’t be alarmed, it doesn’t refer to illicit drugs, but it does embrace a lot of pub culture.

Short for “public house,” it is worth noting that a pub isn’t just a bar. Pubs have bars, but they also offer some of the best food, music, storytelling and social life in Ireland. In Dublin city with its thousands of years of history, more museums and historic sites than you can count, as well as  vibrant arts, literary, and music communities, pubs are often where the people go to meet and to carry on traditions. Visitors are always given a warm welcome to join in.

While a trip to more hyperactive Temple Bar is on most visitor’s must-do lists, you will uncover Dublin’s real pub culture and authentic traditional music a short distance beyond that district. With a day or two more to explore, you might want to check out the music and fabulous Irish humor with an evening of stand-up comedy at The Craic Den, or drop into the Celt Bar where the mix of locals and tourists is pretty much even. During the Irish Civil War (1922-1923), The Confession Box was a popular watering hole for rebel leaders, and The Brazen Head takes the prize as the oldest pub in Dublin, estimated to have opened about 1198.

However, if time in Ireland is short, Johnnie Fox’s Pub is only a 20-minute taxi ride back into the hills from Dun Laoghaire Marina. Built in 1798 and restored to a large space of old beamed ceilings and roaring open fireplaces, it claims to be the highest pub in Ireland. If you opt for a Hooley Night package, expect a four-course dinner followed by a traditional music and dance show of “River Dance” caliber, but on a smaller scale. Paul Janson recommends the pub and show as “a guaranteed good night out!”

To learn more about the marina, visit dlmarina.com, and for more information the surrounding area, visit Dublin website www.visitdublin.com.

Victoria-based Alison Gardner is a travel journalist and editor of the online magazine Travel with a Challenge, www.travelwithachallenge.com, a resource for mature travelers featuring ecological, educational, cultural and volunteer vacations worldwide. Comments on this story are welcome below. 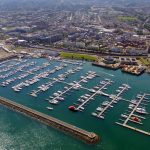 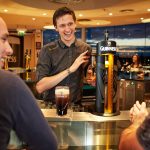