Looking back on 17 years of The Triton, the first things that come to mind are the bad stories:

The funny thing is, each of those situations — yes, even the one where that captain got fired — had a positive outcome. So even though there were tough days and tough deadlines, the body of work we original “Tritions” leave behind in the archives represents the most rewarding journalism I have done.

I met that soon-to-be-fired captain in Newport in the early days. I was conducting my daily survey during the boat show and asked “What was your best day in yachting?” This captain joked, “This one was pretty good. The boss just left.”

We both chuckled and I went on my way. It was a cute comment, taken at the end of a long trip as the captain obviously looked forward to a little down time. I printed it; the boss saw it and let the captain go.

The next time I saw this captain, about a year or so later on a different boat, he told me the story. He landed on his feet and could laugh with me about it. But I learned a lesson: Protect captains and crew from themselves. Assume the boss will somehow see what they say and make sure we print nothing that can get them in trouble. I would be told many “funny” things over the years; they rarely made print again.

For our third issue, I sat down at Lester’s Diner with a captain and a yacht owner to talk about a scary and troubling turn of events they had had with a towing company and salvage claim. I told their story — their side of the story, I should say. Todd Duke of Resolve Marine (not the salvage company involved in this story) called to teach me about salvage and how it works. He was kind in his criticism and I learned a lot. He became a valuable source for years after that.

My lesson this time: Even though I wanted The Triton to represent captains and crew, every story was a chance to educate them as well.

That first year, I was able to report on three boat fires from the captains involved, wrote about the new regulation of Advanced Notice of Arrival, state-filed price-gouging complaints of hurricane dockage rates (after four near-miss hurricanes in six weeks), and VAT issues for charter yachts. I think our readers took us seriously from the beginning.

In our second year, Hurricane Wilma barreled down on South Florida just as the tents were being put up in preparation for the 46th annual Fort Lauderdale International Boat Show. The storm hit Florida’s southwest coast on the morning of Monday, Oct. 24, just three days before the planned start of the show. The eye blew over just north of Fort Lauderdale later that day, its strongest cell of weather passing right over the show. About 95 percent of the county was without power.

Fortunately, our website was housed outside of South Florida, so we were able to continue providing updates. Neither the show’s owner (MIASF) nor producer (Show Management) could do that, so the industry turned to The Triton for information about the town and the show’s status. We also gave our readers a platform to voice their opinions about the prospect of having a recreational boat show in the days after one of the worst storms to hit South Florida in decades. We took some heat for airing those views, but I felt strongly then (and now) that that’s the job of a community newspaper.

We also produced a special wrap-around with a story and photos in the 24 hours after the storm  and were able to print that issue in time for the start of the show the following week.

We earned a lot of credibility that week, and a reputation for hard work.

But perhaps the thing I am most proud of are the monthly captains lunches we hosted, more than 200 over the years. Even that accomplishment conjures up a few bad memories, like the time only two captains showed up when I tried to organize it during the Newport show one year. (We canceled that one and did it back in Lauderdale the following week.)

And the time one smart and professional captain who had been to several decided not to come anymore. Some of his captain colleagues teased him for attending, belittling the effort and making fun of the topics and conversations.

This captain still talked to me, though. In fact, he trusted me more with behind-the-scenes realities I never would have learned about any other way.

Some captains told me they would never come, but they admitted they always read it. I was proud when captains in Lauderdale for a refit or provisions would call to ask for an invite, saying something like “I’ve been reading them for years and would really like to attend.” I was proud when that captain I got fired agreed to come, more than once. And maybe my proudest was when legendary captains attended. (That’s also when I was my most nervous.)

I was always a tad bit surprised that hundreds of people would attend our monthly networking events to connect with each other. And it gave me a mother hen sort of warmth to watch crew who hadn’t seen each other in months or years find each other at a Triton event and share a hug and smile.

David and I started The Triton when our daughter was a toddler. Many of our South Florida-based readers watched her grow up at our monthly networking events. She went off to college in the fall of 2020 (!), soon after COVID knocked the stuffing out of The Triton staff. Though we hadn’t been making plans for the next phase of our lives, the pandemic and our new empty nest converged to convince us it was time for something new.

When Kevin approached us, we listened with fresh ears and saw a new life for the business and ourselves. We are comfortable knowing The Triton is in good, seafaring hands.

I know that the new version of Triton will continue to provide that touchpoint where crew and industry can connect and learn from each other. And I know it will continue to inform the whole industry on the realities and challenges of what it is to run a luxury yacht.

There will always be “bad” stories, but when the intention is to serve the community, positive outcomes always survive. Best of luck to the new generation of Triton.

One captain’s mission to ‘bullet proof’ his A/C system

After more than 30 years playing with, working on and running boats in several sectors of the maritime industry, one thing about yachting made Capt. Herb Magney nuts: how

From the Bridge: Triton asked captains to talk about the challenges of holidays

The holiday season can be hard for those who can’t get time off work, or those who are far from their families. For yacht crew, both are a

Yacht captains and crew — as well as other yachting professionals — found lots of news of interest on The-Triton.com last year.  Not surprisingly, half of the top 10

Publisher’s Point: A transition, a rebirth in the time of COVID

The first Triton published since March in on the streets. COVID-19 hit our small business hard, but unlike many others, we could pivot to the digital world and continue 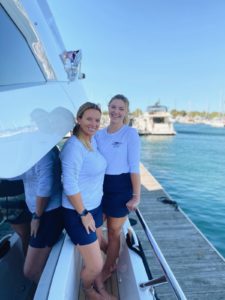 By Lucy Chabot Reed Capt. Kelly Gordon and her crew aboard the 75-Sunseeker M/Y Corporate Retreat had just come the long way around from Florida to Chicago. Thanks to

Could boatyard buyouts mean changes ahead for contractors and captains?

Soaring boats sales and a boom in waterfront housing have made savvy investors see the value in preexisting boatyards as limited commodities uniquely poised to service and house all those big, …